18th April 11am – Anne Duffield calls me “Have you seen the news? Theresa is going for the 8th June!”

We’re already campaigning hard for Andy Burnham for Mayor and over in Altrincham for a council by-election. The polls are abysmal; and worse… I’m on record as wanting an early General Election.

I’ve been the lone voice arguing for months that Labour should be on the front foot demanding Theresa May calls an early election. The Tories haven’t got a mandate for the Brexit they’re pursuing and the electorate needs to speak. Theresa May is effectively using the same argument, except we’re on the back-foot. The polls are just about as bad they could be.

The Conservatives have moved into a 20-point lead over Labour for the first time in nine years https://t.co/B8c6mlIlDi pic.twitter.com/eTXGzI2xPm

As parliament is still sitting, we won’t see Kate until the weekend. Meanwhile the media are on hyperdrive, searching for stories of discord, or making them up. We don’t yet know how the party will confirm candidates. The assumption is that it’ll be straight-forward, but the press are hoping for something more messy. It turns out that even losing candidates from 2015 will be able to be a candidate again in 2017 without a full selection. Not totally convinced that this is the right approach. Clearly we haven’t the resources or time to go through a full selection everywhere. but where the candidate lost, I think it’s reasonable to ask the question whether someone else could do better. The Tories strangely seem to be in the same predicament. I use the word ‘strangely’ since they called the election, yet they don’t seem ready for it.

By the first weekend, we’re pretty much set. Kate had indicated who her campaign team would be long before the election was called. Me as agent, Tom as campaign manager, Ita and Bernice running members/distribution and Morris Hall. We just need to settle on a campaign budget. I’m figuring that as things stand, it’s going to have to be more than last time (2015) when we were twinned to help Warrington South and additionally the general election coincided with local elections. The polls are far worse and we’re on our own as far as a twinning strategy is concerned. Kate is extremely popular, Tory run Trafford Council is extremely unpopular, and deservedly so, particularly in the north of the borough. We’re hearing some voters saying they won’t vote Labour because of Jeremy Corbyn, others are enthusiastic because of him. The bottom line is that the polls put us at our lowest for a generation, which suggests we’ll have to work for every vote.

Our membership is huge, we’ve got recently joined members who are full of energy and determination. We’ve got a common goal of winning as many seats as possible. Labour is an incredibly powerful force when it pulls together, so there’s a real onus on the campaign to be inclusive and not to operate in cliques.

We need to get Broadheath by-election out of the way, so we can begin a bit of canvassing. Tom can begin drafting and getting the orders in for our leaftlets etc.

I’m keen that we start using the doorstep app which is a canvassing tool for smartphones. I’ve been on a few canvass sessions in Broadheath where we have had so many helpers that I’ve found I’ve spent most of the time waiting to be allocated a door to knock or waiting to have the info recorded. It just seems obvious to me that having the info on a phone means I could just be getting on with it.

Others are sceptical. I get consent to try it out in Gorse Hill Ward.

First time on the Doorstep App, it doesn’t work. I can’t log in.

Second time, it’s me and Kate on Auburn Ave in Lostock. We operate like overlapping fullbacks and the app works perfectly. If we’d had to share a clipboard, it would have been slow going. Too big a team and it’s easy to just chat to other canvassers. Too small and it’s the person with the board with nothing to do.

It’s good that Kate is an early adopter of the technology. Without her blessing I doubt we’d have used it to such good effect throughout the campaign. The ‘App’ became a big thing here in this campaign, in other constituencies, less so.

Suddenly everything looks a little bit rosier. The election of Andy Burnham has been overwhelming across Trafford. He’s won every ward in Stretford and Urmston by a landslide. Amy Whyte has had a fantastic victory in Broadheath. There’s a spring in everyone’s step.

My next task is to get the official nomination of Kate submitted. But first we need to launch the campaign. A handy place to get the ten signatures we need. I’m dead keen to include newer activists who’ve been working hard both here and in Broadheath. I think we only had one Councillor on the list. I was pleased with the list of people nominating Kate.

By the way, who’s the Conservative Candidate?

Even Thursday’s Messenger hasn’t been given the name of the Tory Candidate although it’s got both the Lib Dems and ours. We eventually confirm that it’s Lisa Cooke who’s been chosen. It’s someone we know since she fought the seat back in 2015 but I’d not heard anything from her since to suggest she was still active in the Conservative Party politics.

Edit with the Benefit of Hindsight

Over the next few days, we come to realise that this tactic of making the campaign all about Theresa May rather than individual candidates was pretty much universal. There’s images from all over the country of direct mail sent in the name of the prime minister asking for support. The actual local candidate just gets a brief mention. Given that Theresa May wouldn’t debate or even meet ordinary voters, it is a great relief to myself as a democrat that the tactic would eventually prove so abysmally unsuccessful.

I guess everyone has their own moment where it began to change. This was mine. Emily Thornbury visibly demolishing and diminishing Michael Fallon on prime telly was the point where I began to think we’re coming back into this.

Everything gets put in Perspective

The pause in the election brought home how much work we’d all been doing. An election campaign is a huge operation even at constituency level. So many people working hard for change. We had an incredible amount of people helping Kate and Labour and Jeremy. It was a fantastically unified campaign amongst those who were taking part in the campaign. It didn’t matter what wing of the party, or what was the political motivation, we worked together.

It’s something the Tories will never match

Finally got to see some Tories. Just a few turned up from Stretford and Urmston. We’re pretty sure that they did nothing apart from a single leaflet posted by the Royal Mail. Hugely annoyed that their vote went up by a 1000 votes. It sticks in my craw that a party that took so little notice of its own voters during an election should increase its vote.

Thankfully, Jeremy Corbyn’s/Kate’s/Labour vote increased by nearly 9000 votes. Everyone deserves a share of this. It was similar across Greater Manchester and the North West. The picture on the other side of The Pennines seems totally different. My own view is that within Labour, we have many on that side of the country legitimising the Brexit/Ukip message when we should be challenging it. It’s a risky game because the chances are that the east of the country will be worst affected by Brexit. 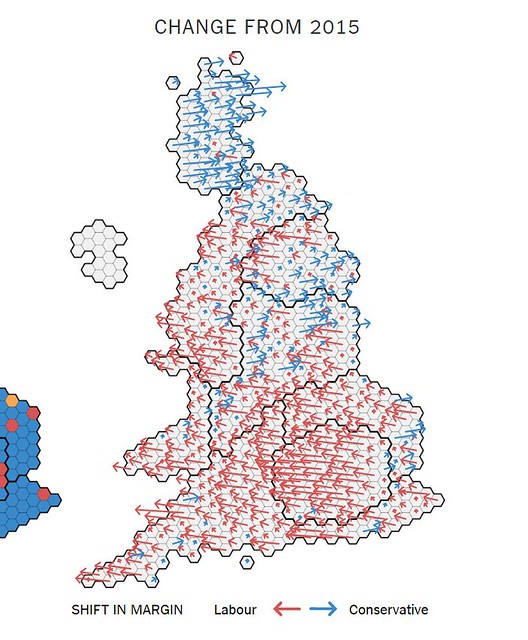 The expenses are tallied and submitted. Thankfully we were never a marginal seat with shadow Ministers and Battlebuses dropping in. Thankfully too, I don’t have to reimburse the shoe leather sacrificed by our members and supporters. If we did have to repay all the volunteers I think I’d have been overspent before a single letter was printed. Many thanks too everyone and I’d wholeheartedly recommend it if you ever get the chance to be agent.